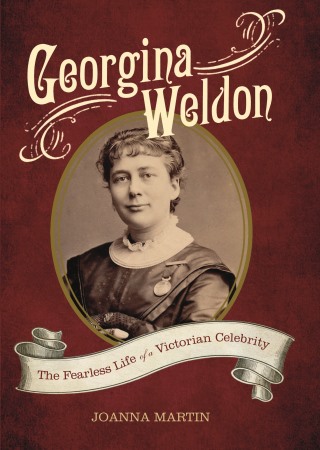 The Fearless Life of a Victorian Celebrity

For more than a decade in the second half of the nineteenth century Georgina Weldon (1837-1914) was one of the most famous women in England. Weldon was an exceptional self-publicist, intelligent and utterly convinced that she wasalways in the right. A semi-professional singer, she came to prominence as a friend of the composer Charles Gounod. Her husband's unsuccessful attempt to have her carried off to a lunatic asylum caused a public scandal, and her subsequent efforts to drag her enemies through the law courts were widely reported. Weldon's resistance to being certified insane and her unceasing legal claims for defamation and/or loss of earnings contributed to changes in laws relating to private asylums and vexatious litigation.

Weldon sang in drawing rooms and concert halls, and on the music hall stage. She lectured on women's rights and law reform. The most notorious female plaintiff, and probably the first married women to represent herself in court, she advised many of her fellow litigants at a time when women were not permitted to practise law professionally. Her campaigns brought her notoriety and two gaol sentences.

Joanna Martin expertly retells the story of that notorious Victorian eccentric who suffered many bouts of delusion and was an ardent supporter of spiritualism. Martin's account manages to negotiate a biography situated between crazed behaviour and the pursuit of admirable causes. Weldon's story offers a wide canvas introducing phenomena such as celebrity culture and major and marginal characters of Dickensian quality. This biography of Weldon, based on primary sources including Weldon's own diaries and letters, therefore touches upon a wide variety of issues; Victorian society, nineteenth-century's women's history, the context of a social and cultural history of madness and marriage (law), and nineteenth-century British musical culture.