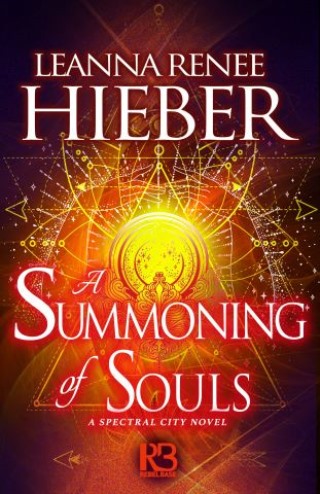 A Summoning of Souls

At the dawn of the twentieth century, New York City houses both the living and the dead. And when it comes to crimes of an otherworldly nature, it falls to the psychics and spirits of the city’s finest secret agency—The Ghost Precinct—to serve justice beyond the earthly realm . . .

The ethereal denizens of New York owe a great debt to Eve Whitby, the young talented medium who leads the all-female spiritualists in the police department’s Ghost Precinct. Without her team’s efforts on behalf of the incorporeal, many souls would have been lost or damned by both human and inhuman means.

But now Eve faces an enemy determined to exorcise the city’s ghostly population once and for all. Albert Prenze is supposed to be dead. Instead he is very much alive, having assumed the identity of his twin brother Alfred, and taken control of the family’s dubiously made fortune. With unlimited wealth at his disposal, Albert uses experimental technology to banish ghosts to an eternal darkness forever.

To achieve his vicious ends, Albert plots to manipulate Eve and twist her abilities into a psychic weapon—a weapon that not only poses a threat to spirits but to everyone she cares for, including her beloved Detective Horowitz . . .

“The Spectral City is a spooky thrill . . .  filled to the brim with beauty and peril.”
—Cherie Priest, Locus Award-winning author

“Otherworldly mystery [with] gorgeous writing and slow burn of a romance.”
—National Public Radio on A Sanctuary of Spirits

“Hieber’s momentous third Spectral City fantasy sees tensions in the spirit world come to an explosive head…It is extremely satisfying to witness the scrappy heroes rise up . . . Hieber’s latest fires on all cylinders.”
—Publishers Weekly on A Summoning of Souls

Leanna Renee Hieber: Actress, playwright and author Leanna Renee Hieber is the award-winning, bestselling writer of gothic Victorian fantasy novels for adults and teens. Her novels such as the Strangely Beautiful saga, and the Eterna Files series have garnered numerous regional genre awards, including four Prism awards, and have been selected as "Indie Next" and national book club picks. She lives in New York City where she is a licensed ghost tour guide and has been featured in film and television shows like Boardwalk Empire. Follow her on Twitter@leannarenee, or visit www.leannareneehieber.com.