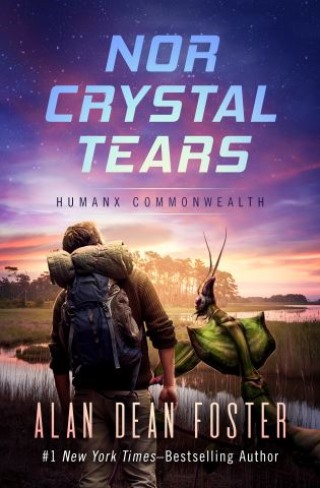 A first-contact novel written from an alien perspective by the #1 New York Times–bestselling author of Star Wars: The Force Awakens and Star Trek Into Darkness.

Ryo is one of the Thranx, a race of social arthropods. From his larval years to now, his life has been normal, though his love of learning and insatiable curiosity set him apart. He has settled into his work as an agriculture specialist and is premated to a lovely female. Yet Ryo still feels something is missing from his life, and when he heroically defends his colony from the Thranx’s reptilian nemesis, Ryo gets a taste of excitement that’s hard to forget.

Then his premate shares a garbled message from her starship-captain cousin—one that hints at the discovery of a completely new, completely alien space-going intelligence. Even when the captain backtracks and denounces the experience as a deep-space nightmare, Ryo can’t let it go. He becomes obsessed, leaving his colony and family behind to chase rumors of a murderous alien race, horrible beyond imagining. And when he finally makes it to an isolated military outpost rumored to harbor the captured aliens, he comes face-to-face with . . . humanity.

“One of the most consistently inventive and fertile writers of science-fiction and fantasy.” —The Times (London)

“Foster knows how to spin a yarn.” —Starlog

“Alan Dean Foster is the modern day Renaissance writer, as his abilities seem to have no genre boundaries.” —Bookbrowser

The New York Times–bestselling author of more than one hundred ten books, Alan Dean Foster is one of the most prominent writers of modern science fiction. Born in New York City in 1946, he studied filmmaking at UCLA, but first found success in 1968 when a horror magazine published one of his short stories. In 1972 he wrote his first novel, The Tar-Aiym Krang, the first in his Pip and Flinx series featuring the Humanx Commonwealth, a universe he has explored in more than twenty-five books. He also created the Spellsinger series, numerous film novelizations, and the story for Star Trek: The Motion Picture. An avid world traveler, he lives with his family in Prescott, Arizona.