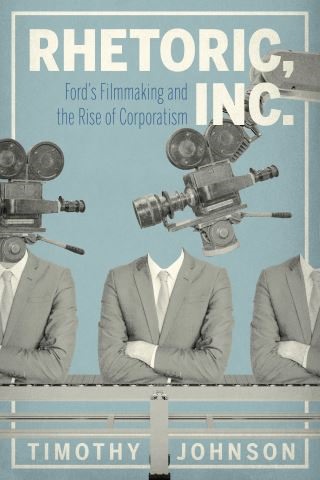 Ford’s Filmmaking and the Rise of Corporatism

In 1914, the Ford Motor Company opened its Motion Picture Laboratory, an in-house operation that produced motion pictures to educate its workforce and promote its products. Just six years later, Ford films had found their way into schools and newsreels, travelogues, and even feature films in theaters across the country. By 1961, it is estimated that the company’s movies had captured an audience of sixty-four million people.

This study of Ford’s corporate film program traces its growth and rise in prominence in corporate America. Drawing on nearly three hundred hours of material produced between 1914 and 1954, Timothy Johnson chronicles the history of Ford’s filmmaking campaign and analyzes selected films, visual and narrative techniques, and genres. He shows how what began as a narrow educational initiative grew into a global marketing strategy that presented a vision not just of Ford or corporate culture but of American life more broadly. In these films, Johnson uncovers a powerful rhetoric that Ford used to influence American labor, corporate style, production practices, road building, suburbanization, and consumer culture. The company’s early and continued success led other corporations to adopt similar programs.

Persuasive and thoroughly researched, Rhetoric, Inc. documents the role that imagery and messaging played in the formation of the modern American corporation and provides a glimpse into the cultural turn to the economy as a source of entertainment, value, and meaning.