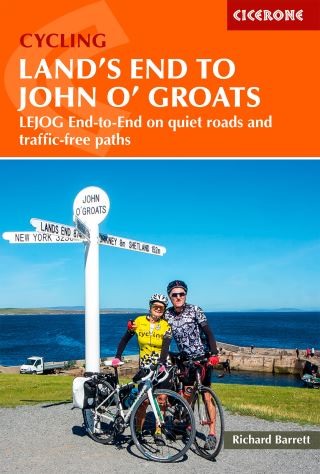 A concise guide to cycling LEJOG - Land's End to John o' Groats - describing an idyllic route that follows quieter roads and traffic-free paths but without too much meandering. Covering 1000 miles, the route is divided into 14 stages and can be comfortably ridden in two weeks. Easy-to-follow route descriptions are accompanied by clear mapping and useful gradient profiles, together with route highlights and points of interest, of which there are many. Invaluable tips and tricks are also included from preparing yourself to preparing your bike, together with logistical advice such as getting to and from the start and finish, accommodation options and more. In addition to the main 14-stage schedule (which includes an alternative option through Central Scotland), longer and shorter schedules are also suggested, making it easy to prepare a personally tailored adventure. The route, which passes through a diverse range of landscapes, from almost sea level across the Somerset Levels to over 1400ft through the magnificent Cairngorm Mountains, showcases some of Britain's best cycling. It is a must for anyone who's ever been remotely tempted to take on this iconic end-to-end challenge.

Richard Barrett: Richard Barrett spent his working life as a professional marketer, but still found time for climbing, winter mountaineering and sea kayaking. He first visited the Harris hills as a teenager and became a regular visitor. He lived in North Harris for a number of years, where he and his wife ran a guest house and, although now a city-dweller, he still makes frequent forays to the Hebrides, reconnecting with the wilderness and catching up with old friends.