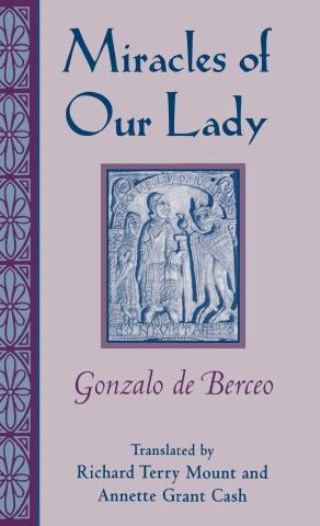 Miracles of Our Lady

Miracle tales, in which people are rewarded for piety or punished for sin through the intervention of the Virgin Mary, were a popular literary form all through the Middle Ages. Milagros de Nuestra Sehora, a collection of such stories by the Spanish secular priest Gonzalo de Berceo, is a premier example of this genre; it is also regarded as one of the four most important texts of medieval Spain. Difficulties in translating this work have made it unavailable in English except in fragments; now Spanish-language scholars Richard Terry Mount and Annette Grant Cash have made the entire work accessible to English readers for the first time.

Berceo's miracle tales use the verse form cuaderna via (fourfold way) of fully rhymed quatrains—which Berceo may even have invented—and are told in the language of the common man. They were written to be read aloud, most likely to an audience of pilgrims, and are an outstanding example of oral religious narrative. The total work comprises twenty-five miracles, preceded by a renowned Introduction that celebrates the Virgin in rich symbolic allegory. Mount and Cash's translation is highly readable, yet it retains the original meaning and captures Berceo's colloquial style and medieval nuances.

An introduction placing the miracles in their medieval context and a bibliography complement the text.