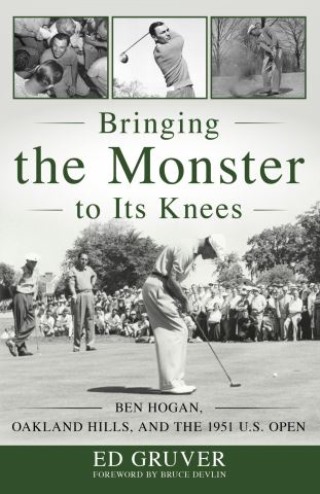 Bringing the Monster to Its Knees

Bringing The Monster to its Knees: Ben Hogan, Oakland Hills, and the 1951 U.S. Open is the first full-length book on a victory that the four-time U.S. Open champion always maintained was the "most satisfying" of his long and storied Hall of Fame career. It fills an important void in previous books on Hogan's tournament play, books covering his championship quests from Merion in 1950 to the Olympic Club in San Francisco in 1955 to Cherry Hills in 1960.

The 1951 U.S. Open at Oakland Hills is unique in that it represents the first time the USGA deliberately altered a course for a championship, a practice that became common in the years that followed and continues to this day. The result was "The Monster," a creation of famed course architect Robert Trent Jones. It remains the most infamous course layout in history and arguably the most torturous test ever presented to golfers anywhere.

Overcoming chronic pain that was a vestige of his near-fatal car crash in 1949, a field filled with future Hall of Fame players, and a course so devilish in its design that it was labeled "Oakland Hells," Hogan called his record-setting final round 67 in the '51 Open the "greatest round I have ever played." He then issued one of the most famous quotes in sports history: "I'm glad I brought this course—this monster—to its knees."

• Author Bio: Ed Gruver is the author of seven books on American sports, including The Ice Bowl: The Cold Truth About Football’s Most Unforgettable Game; From Baltimore to Broadway: Joe, the Jets and the Super Bowl III Guarantee; The American Football League: A Year-by-Year History, 1960-69; Koufax; and Nitschke. His work has appeared in numerous national magazines, including American History and NFL Alumni, and he writes for several online sports sites.