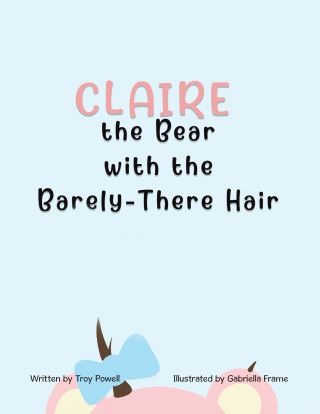 Claire the Bear with the Barely-There Hair

Several years ago, the power went out in my home, stranding my family in the dark with only one flashlight. When I held the flashlight under my bushy beard to talk to the children, the tangled mess of my beard was broadcast over the ceiling, prompting my children to laugh and say that a bear had snuck into our house. Then they wanted to hear “scary stories,” but I was at a loss to come up with any, so I said the first thing I could think of, “Claire was a bear with barely -there hair who became aware that others would stare.” I stopped, surprised by my moment of creative clarity, and immediately knew that I needed to write the story down. Thirty minutes later, the story was complete. I’m so grateful the power went out that night. This story once produced a moment of light for my family, and I hope it will be a light for yours as well.

Troy Powell: Troy Powell is the director of theatre for Union Public Schools. He has taught for twenty-four years where he has received four consecutive Tony nominations for the Excellence in Theatre Education. He has directed over one hundred plays and musicals at Union and in community theatre. He is also the founder of Comedy 101, a comedy improv troupe that has performed all over the United States. He is also a working actor appearing on stage, in film and on television. Troy is also a writer, penning several short stories, plays, and film scripts such as “Bucket List,” “Our Story,” “My Maestro,” and “To Thine Own Self.” He lives in Tulsa, Oklahoma with his wife Stephanie and their four children.