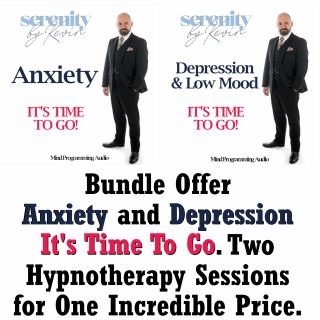 Bundle Offer - Anxiety and Depression It's Time to Go. Two Hypnotherapy Sessions for One Incredible Price.

Bundle Offer - Anxiety and Depression It's Time to Go. Two Hypnotherapy Sessions for One Incredible Price.

Arguably one of the most highly trained experts in mind programming in the world, Kevin Mullin has enhanced the lives of tens of thousands of people. His unique ability to reprogramme your mind in minutes stems from his equally unique training, which saw him removing negative emotions in the middle of warzones.

In a 17-year military career, this decorated British Army Warrant Officer was trained by Her Majesties Armed Forces in numerous mind programming techniques, both within military facilities and civilian universities. This rich education allowed him to teach thousands of soldiers, including Prince Harry, to control the various emotions experienced during battle. On leaving the British Army, he worked as a military contractor for American forces in Afghanistan for six years before bringing his specialised skillset to the public.

As a therapist, Kevin has sold out numerous large venues, worked with celebrities, lectured all over the world, and trained many in his techniques. Still, more importantly, he's helped thousands of people to change their lives positively, quickly, effectively, and permanently.

Now for the first time, Kevin shows the secrets of leadership with "Manager is a title, Leadership is a way of life". Learn how to inspire everyone to be the best version of themselves and walk over coals to do your bidding.