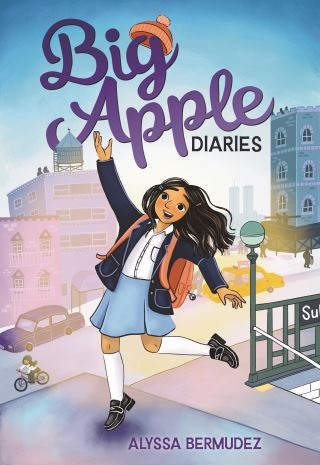 In Big Apple Diaries, a heartfelt diary-style graphic memoir by Alyssa Bermudez, a young New Yorker doodles her way through middle school—until the September 11, 2001, terrorist attack leaves her wondering if she can ever be a kid again.

It’s the year 2000 in New York City. For 12-year old Alyssa, this means splitting time between her Puerto Rican dad's apartment in Manhattan and her white mom's new place in Queens, navigating the trials and tribulations of middle school, and an epic crush on a new classmate. The only way to make sense of it all is to capture the highs and lows in doodles and hilarious comics in a diary.

Then life abruptly changes on September 11, 2001. After the Twin Towers fall and so many lives are lost, worries about gossip and boys feel distant and insignificant. Alyssa must find a new sense of self and purpose amidst all of the chaos, and find the strength to move forward with hope.

Alyssa Bermudez: Alyssa Bermudez is a born and bred New Yorker now living down under in Tasmania. She studied illustration and animation at the Fashion Institute of Technology. After spending many years working for magazines, agencies and schools as an art teacher, she moved across the world to Hobart, Tasmania where she works as a freelance author and illustrator. Her illustrations can be found in many books including the Lucia The Luchadora series and the Amelia Chamelia series.