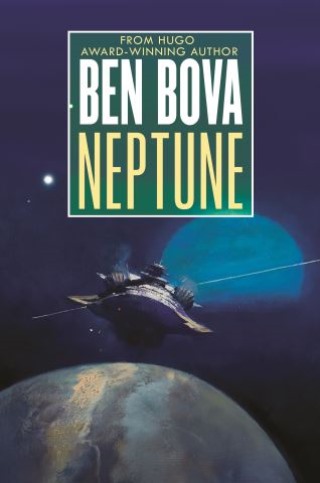 Hugo Award winner Ben Bova continues his grand tour of the human settled solar system with a fan-pleasing look at life in the Outer Planets, among the moons of Neptune.

In the future, humanity has spread throughout the solar system, on planets and moons once visited only by robots or explored at a distance by far-voyaging spacecraft. No matter how hostile or welcoming the environment, mankind has forged a path and found a home.

In the far reaches of the solar system, the outer planets—billions of miles from Earth, unknown for millennia—are being settled. Neptune, the ice giant, is swathed in clouds of hydrogen, helium, and methane and circled by rings of rock and dust. Three years ago, Ilona Magyr’s father, Miklos, disappeared while exploring the seas of Neptune. Everyone believes he is dead—crushed, frozen, or boiled alive in Neptune’s turbulent seas.

Her plans are irrevocably altered when she and her team discover the wreckage of an alien ship deep in Neptune’s ocean, a discovery which changes humanity’s understanding of its future…and its past.

Ben Bova (1932-2020) was the author of more than a hundred works of science fact and fiction, including Able One, Transhuman, Orion, the Star Quest Trilogy, and the Grand Tour novels, including Titan, winner of John W. Campbell Memorial Award for best novel of the year. His many honors include the Isaac Asimov Memorial Award in 1996, the Lifetime Achievement Award of the Arthur C. Clarke Foundation in 2005, and the Robert A. Heinlein Award “for his outstanding body of work in the field of literature” in 2008.

Dr. Bova was President Emeritus of the National Space Society and a past president of Science Fiction Writers of America, and a former editor of Analog and former fiction editor of Omni. As an editor, he won science fiction’s Hugo Award six times. His writings predicted the Space Race of the 1960s, virtual reality, human cloning, the Strategic Defense Initiative (Star Wars), electronic book publishing, and much more.

In addition to his literary achievements, Bova worked for Project Vanguard, America’s first artificial satellite program, and for Avco Everett Research Laboratory, the company that created the heat shields for Apollo 11, helping the NASA astronauts land on the moon. He also taught science fiction at Harvard University and at New York City’s Hayden Planetarium and worked with such filmmakers as George Lucas and Gene Roddenberry.