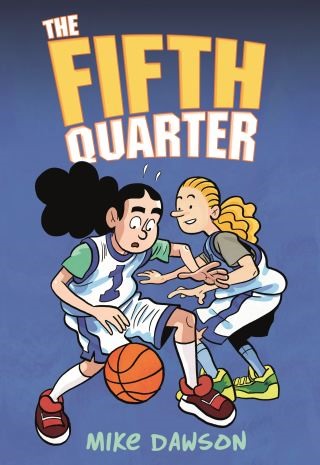 Get ready to hit the court in this heartfelt, sporty, graphic novel, the first in Mike Dawson's middle-grade duology about a girl who deals with her insecurities through her love of basketball.

Lori Block is dedicated to her fourth-grade basketball team, despite being relegated to an extra period before the real game starts, known as the fifth quarter, where the not-so-good kids play and the points don’t count. That doesn’t matter to Lori though, because working on her skills gives her hints of self-confidence, which is a nice break from feeling awkward and out-of-place in her daily life.

With athletic promise and a dogged determination to keep improving, Lori pursues her passion while navigating awkward social dynamics, her own expectations, and her first overnight away from home. Will her drive allow her to find true courage both on the court, in school, and at home?

Mike Dawson: Mike Dawson is the author of several graphic novels and comics collections. His work has appeared at The Nib, Slate, and The New Yorker, and has been nominated for multiple Eisner and Ignatz Awards, as well as the Slate Cartoonists Studio Prize. He lives at the Jersey Shore with his wife and children.