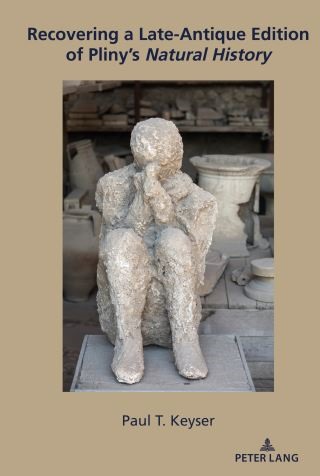 Half a dozen authors quote a total of over forty extracts from Pliny’s Natural History that are absent from our manuscripts of Pliny. These extracts have been virtually ignored by scholars, and never studied systematically. This book demonstrates that the half-dozen sources, Latin writers of the fifth to thirteenth centuries CE, are reliable, and argues that their extracts should be received as good evidence of a hitherto unsuspected augmented edition of Pliny, probably produced around 300 to 350 CE. Greek writers of the same era produced augmented versions of scientific texts to update, expand, and "complete" the work of the original authors. Pliny’s own work is composed in such a way as to invite augmentation. Paul T. Keyser’s efforts to recover the augmented Natural History suggest that late-antique Latin writers were also renovators of their scientific literature. The unknown augmentor, Keyser argues, was aiming to "complete" Pliny with new data, and to organize Pliny’s sometimes scattered presentations, all with the aim of making Pliny’s work more useful. The evidence shows that even in unfavorable times, some Latin writers were able to continue practicing science.

Paul T. Keyser studied physics and classics at St. Andrew’s School, Duke University, and the University of Colorado at Boulder (where he obtained a Ph.D. in physics and another in classics). He taught at Edmonton, Cornell, and Tuscaloosa before becoming a software engineer at IBM and Google. He now works as a site-reliability engineer and publishes on ancient Greco-Roman science and technology. He has co-edited three books: Greek Science (2002); Encyclopedia of Ancient Natural Scientists (2008); and the Oxford Handbook of Science and Medicine in the Classical World (2018).