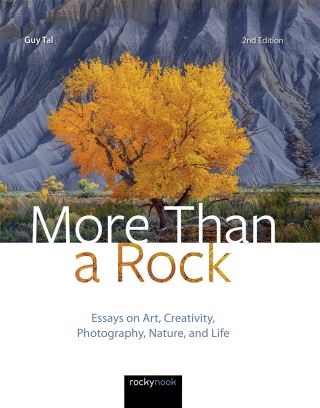 More Than a Rock, 2nd Edition

A deeper look at the creativity, art, expression, craft, and philosophy of landscape photography.


More Than a Rock, 2nd Edition is a passionate and personal book about creativity and expression. In this series of over 70 brief essays, photographer and teacher Guy Tal shares his thoughts and experiences as an artist who seeks to express more in his images than the mere appearance of the subject portrayed. Following up on the success of the first edition, this revised edition contains updated imagery, a new essay in each of the book’s four sections—Art, Craft, Experiences, and Meditations—and is presented in a beautiful hardcover format.

Tal makes an argument to consider creative landscape photography—expressing something of the photographer's conception through the use of natural aesthetics—as a form of visual art that is distinct from the mere representation of beautiful natural scenes. Tal covers topics such as the art of photography, approaches to landscape photography, and the experiences of a working photographic artist. His essays also include reflections on nature and man’s place in it, living a meaningful life, and living as an artist in today’s world.

The book is decidedly non-technical and focuses on philosophy, nature, and visual expression. It was written for those photographers with a passion and interest in creative photography. Anyone who is pursuing their work as art, is in need of inspiration, or is interested in the writings of a full-time working photographic artist will benefit from reading this book. The book is visually punctuated with Tal’s inspiring and breathtaking photography.

“Some images look like things, while others feel like things; some images are of things, while others are about things. A creative image is not a record of a scene nor a substitute for a real experience. Rather, it is an experience in itself—an aesthetic experience—something new that the artist has given the world, rather than a contrived view of something that already existed independent of them.”
—Guy Tal

“The medium of photography has a long tradition of practitioners who were not only masterful photographers, but were also insightful and thoughtful writers—the thinking man’s photographers. Among them we find such greats as John Szarkowski, Minor White, Bill Jay, and Robert Adams. It is no exaggeration to include Guy Tal on this esteemed list.”
— From the Foreword, by Chuck Kimmerle

Guy Tal: Guy Tal spent the first 26 years of his life in Israel where he was born, served a mandatory military service, and studied and taught at the Tel Aviv University. As a youth, he loved to explore the natural areas around his home by the Mediterranean Sea, as well as the Negev Desert and the Golan Heights. It was during one of these outings that Guy first picked up a camera to document the things that fascinated him about the natural landscape and its wild inhabitants. This prompted a passion for and deep interest in photography that continues to grow and intensify to this day—three decades later. At odds with the political turmoil and rampant urbanization of his homeland, Guy immigrated to California where he embarked on a career in information technology. He also began an enduring love affair with the wild places of the American West. Guy found that he was unfulfilled by the urban, career-driven life, and decided to move closer to his beloved deserts and mountains of the Colorado Plateau. He ultimately settled in a tiny, remote town at the foot of Utah’s Aquarius Plateau, on the edge of Utah’s famous canyon country—a place that inspires him deeply and where he practices most of his work. A lifelong learner and explorer, Guy’s interest in art, science, and philosophy converged with his intense love of wild places, which he expresses through his photography and writing. He is a public speaker, educator, and frequent contributor to several photographic publications. Guy’s first book, More Than A Rock, was published by Rocky Nook in 2015.