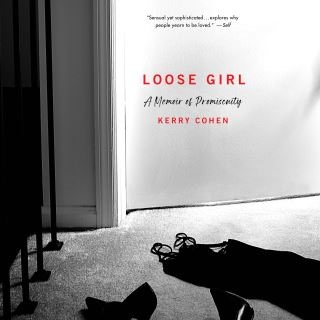 A Memoir of Promiscuity

This captivating and deeply emotional memoir pulls back the curtain on the complex relationship women have between their bodies, love, and the way the two work together.

Kerry Cohen is eleven years old when she recognizes the power of her body in the leer of a grown man. Her parents are recently divorced and it doesn't take long before their lassitude and Kerry's desire to stand out—to be memorable in some way—combine to lead her down a path she knows she shouldn't take. Kerry wanted attention. She wanted love. But not really understanding what love was, not really knowing how to get it, she reached for sex instead.

Loose Girl is Kerry Cohen's captivating memoir about her descent into promiscuity and how she gradually found her way toward real intimacy. The story of addiction—not just to sex, but to male attention—Loose Girl is also the story of a young girl who came to believe that boys and men could give her life meaning. It didn't matter who he was. It was their movement that mattered, their being together. And for a while, that was enough.

From the early rush of exploration to the day she learned to quiet the desperation and allow herself to love and be loved, Kerry's story is never less than riveting. In rich and immediate detail, Loose Girl re-creates what it feels like to be in that desperate moment, when a girl tries to control a boy by handing over her body, when the touch of that boy seems to offer proof of something, but ultimately delivers little more than emptiness.

Kerry Cohen's journey from that hopeless place to her current confident and fulfilled existence is a cautionary tale and a revelation for girls young and old. The unforgettable memoir of one young woman who desperately wanted to matter, Loose Girl will speak to countless others with its compassion, understanding, and love.

Kerry Cohen:
Kerry Cohen is a doctor of clinical psychology and works as a licensed therapist in Portland, Oregon. She is the author of the memoirs Loose Girl: A Memoir of Promiscuity, Seeing Ezra: A Mother’s Journey Through Autism, Unconditional Love, and the Meaning of Normal, and Girl Trouble. Her work has been featured in the New York Times and Washington Post, and she has been a guest on Dr. Phil and Good Morning America. Her story was also featured on WE Network as part of the documentary The Secret Lives of Women.