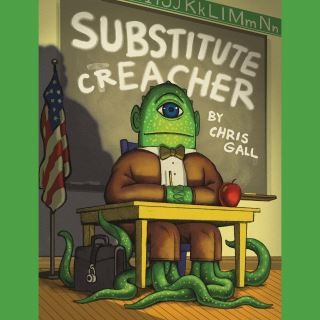 The troublemaking students of Ms. Jenkins' class arrive at school one day to discover a substitute creacher has come to put a stop to their monkey business! He regales them with mind-boggling stories about his former students who didn't follow the rules: Keith the glue-eater, Zach the daydreamer, and Hank the prankster, to name a few. But even this multi-tentacled, yellow-spotted, one-eyed monster's cautionary tales about the consequences of mischief-making can't seem to change the students' wicked ways until he reveals the spookiest and most surprising story of all: his own.

Chris Gall's vibrant artwork leaps off the page with a dynamic comic book aesthetic that will grab both parents and monster-loving kids!

Chris Gall: Chris Gall is the award-winning author and illustrator of Revenge of the Dinotrux, Substitute Creacher, Dear Fish, There's Nothing to Do on Mars, and Dinotrux, a Publishers Weekly Best Children's Book of 2009. His books have received numerous starred reviews and awards including a Borders Original Voices Book for 2006 for Dear Fish and a Kirkus Best Children's Book for 2008 for There's Nothing to Do on Mars. Chris has won a multitude of awards from organizations like the Society of Illustrators and Communication Arts Magazine, and is also the illustrator of America the Beautiful, a Publishers Weekly Best Children's Book of 2004. He lives in Tucson, Arizona.