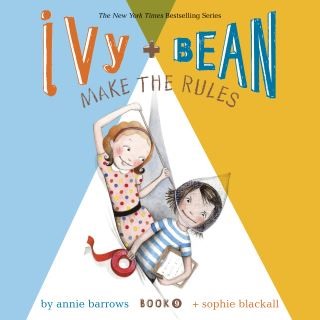 Bean's older sister is going to Girl Power 4-Ever Camp, where she will do Crafts and Music and First Aid and other secret things that Bean will never know about because girls have to be eleven to go to Girl Power 4-Ever Camp. Wait a second! Bean and Ivy can make their own camp, their own better camp: Camp Flaming Arrow, where counselors Ivy and Bean will give a whole new meaning to Crafts, Music, First Aid, and hands-on learning!

Annie Barrows: Annie Barrows is the author of many children's books, including the Ivy + Bean series and The Magic Half, as well as several books for adults, including the bestselling novel The Guernsey Literary and Potato Peel Pie Society. She lives in Northern California with her husband and two daughters.

Sophie Blackall has illustrated over 20 books for children and adults. Her illustrations have won awards ranging from the Ezra Jack Keats Award, the BCCB Blue Ribbon Picture Book Award, and the Founders Award from the Society of Illustrators and can be found everywhere from the New York Times to the transit posters on the New York Subway. Originally from Australia, she now lives in Brooklyn.