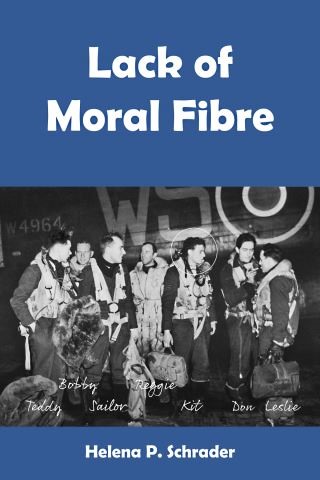 In late November 1943, Flight Engineer Christopher "Kit" Moran, DFM, refuses to fly to Berlin on what should have been the seventh "op" of his second tour of duty. His superiors post him off the squadron for "lack of moral fibre." He is sent to a mysterious DYDN center. Here, psychiatrist Wing Commander Dr. Grace must determine if he has had a mental breakdown requiring psychiatric treatment -- or if he deserves humiliation and disciplinary action for cowardice.

Helena P. Schrader is an established aviation author and expert on the Second World War. She earned a PhD in History (cum Laude) from the University of Hamburg with a ground-breaking dissertation on a leading member of the German Resistance to Hitler. Her non-fiction publications include "Sisters in Arms: The Women who Flew in WWII," "The Blockade Breakers: The Berlin Airlift," and "Codename Valkyrie: General Friederich Olbricht and the Plot against Hitler." In addition, Helena has published nineteen historical novels and won numerous literary awards. Her novel on the Battle of Britain, "Where Eagles Never Flew," won the Hemingway Award for 20th Century Wartime Fiction and a Maincrest Media Award for Historical Fiction. RAF Battle of Britain ace Wing Commander Bob Doe called it "the best book" he had ever seen about the Battle. He went on to say: "Refreshingly, it got it smack-on the way it was for us fighter pilots."