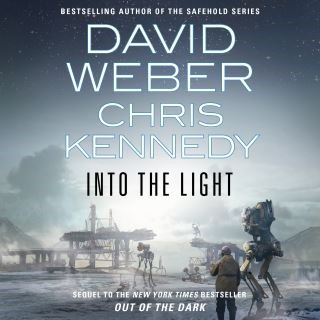 In New York Times-bestselling science fiction epic Out of the Dark, Earth beat back an alien invasion. Now we've got to make sure they don't come back, in Into the Light.

The Shongairi conquered Earth. In mere minutes, half the human race died, and our cities lay in shattered ruins.

But the Shongairi didn’t expect the survivors’ tenacity. And, crucially, they didn’t know that Earth harbored two species of intelligent, tool-using bipeds. One of them was us. The other, long-lived and lethal, was hiding in the mountains of eastern Europe, the subject of fantasy and legend. When they emerged and made alliance with humankind, the invading aliens didn’t stand a chance.

Now Earth is once again ours. Aided by the advanced tech the aliens left behind, we’re rebuilding as fast as we can.

Meanwhile, a select few of our blood-drinking immortals are on their way to the Shongairi homeworld, having commandeered one of the alien starships...the planet-busting kind.

David Weber: David Weber is a science fiction phenomenon. His popular Honor Harrington and Honorverse novels—including Mission of Honor, At All Costs, and Torch of Freedom—are New York Times bestsellers and can't come out fast enough for his devoted readers. He is also the author of the Safehold series, including Off Armageddon Reef, By Schism Rent Asunder, By Heresies Distressed and A Mighty Fortress. His other top-selling science fiction novels include Out of the Dark, the Dahak books and the Multiverse books, written with Linda Evans. He has also created an epic SF adventure series in collaboration with John Ringo, including We Few. His novels have regularly been Main Selections of the Science Fiction Book Club. Weber has a bachelor’s degree from Warren Wilson College, and attended graduate school in history at Appalachian State University. He lives in South Carolina.|||CHRIS KENNEDY is a former school principal and naval aviator. His self-published novels include the Occupied Seattle military fiction duology, the Theogony and Codex Regius science fiction trilogies, and the War for Dominance fantasy trilogy.