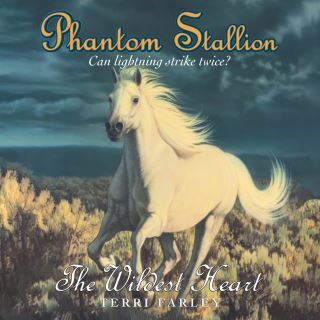 When a lightning storm strikes the wild horse sanctuary and sets the pasture on fire, all the mustangs panic -- including the Phantom's herd.Then, in the midst of the fire, a terrible accident injures the Phantom, and Sam is terrified that he might not recover. If he doesn't, can he survive in the wild? Or will Sam's wild horse need to be captured?

Terri Farley: Terri Farley​ is the best-selling author of books about the contemporary and historic West. Her most recent book ​Wild at Heart: Mustangs and the Young People Fighting to Save Them​ (Houghton Mifflin Harcourt) is a Junior Library Guild selection; winner of the Sterling North Heritage award for Excellence in Children's Literature; and has been honored by Western Writers of America, National Science Teachers Association, and American Association for the Advancement of Science. She is a recent inductee into the Nevada Writers Hall of Fame. Her ​Phantom Stallion​ (HarperCollins) series for young readers has sold over two million copies worldwide.