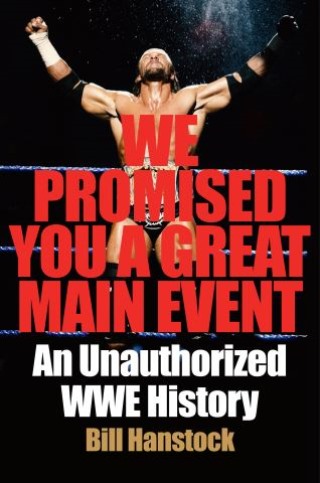 We Promised You a Great Main Event

In We Promised You a Great Main Event, longtime sports journalist Bill Hanstock pulls back the curtain to give a smart fan’s account of WWE and Vince McMahon’s journey to the top. Untangling the truth behind the official WWE storyline, Hanstock does a deep dive into key moments of the company’s history, from the behind-the-scenes drama at the Montreal Screwjob, to the company’s handling of the Jimmy Snuka scandal, to the real story of the Monday Night Wars.

WWE is an extraordinary business success and an underappreciated pop cultural phenomenon. While WWE soared to prominence during the Hulk Hogan years, as the stakes grew more and more extreme, wrestlers faced steroid scandals and assault allegations. The whole story is here, good, bad, and ugly, from the heights of iconic cultural moments like Wrestlemania III to the arrival of global superstars like The Rock and John Cena.

We Promised You a Great Main Event is an exhaustive, fun account of the McMahon family and WWE’s unprecedented rise. Drawing on a decade of covering wrestling, Bill Hanstock synthesizes insights from historians, journalists, and industry insiders with his own deep research to produce the most up-to-date, entertaining history of WWE available. Full of amazing characters and astonishing stories from the ring to corporate boardrooms, it is a story as audacious as any WWE spectacle.

Bill Hanstock is an Emmy-winning producer, screenwriter, editor and journalist. He has covered and interviewed countless WWE and independent wrestling personalities and events for SB Nation, has contributed to Polygon, The Athletic, and Inked magazine, and has penned nearly a dozen stories for the official WWE comic book. He lives in Los Angeles with his wife, son, and two cats.