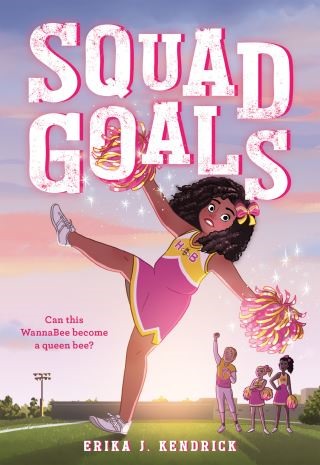 Camp is in session in this cheer-tastic middle-grade novel about making new friends, finding your place, and learning to embrace your inner Magic.

Magic Olive Poindexter has big shoes to fill. Her mother was a professional cheerleader, her father is a retired NBA legend, her big sister is the new face of the oh-so-glamorous Laker Girls, and her grandmother was the first black cheerleader ever on Valentine Middle School's HoneyBee cheer squad. Magic wants nothing more than to follow in their footsteps. But first, she has to survive Planet Pom Poms, the summer cheer camp where she'll audition for a spot on the HoneyBee squad. But with zero athletic ability and a group of mean girls who have her number, Tragic Magic is a long way from becoming the toe-touching cheerleader heroine she dreams of being.

Things start to look up when her best friend Cappie joins her at camp—until Cappie gets bitten by the popularity bug, that is. To make matters worse, Magic's crushing hard on football star Dallas Chase. Luckily, Magic's not alone: with the help of a new crew of fabulous fellow misfits and her Grammy Mae's vintage pom poms by her side, Tragic Magic might just survive—and even thrive—at cheer camp.

Erika J. Kendrick: Erika J. Kendrick is a national speaker, mental health advocate, and former NBA cheerleader. She is a Stanford University graduate with an MBA in marketing and international business from the University of Illinois. Squad Goals is her first middle-grade novel.