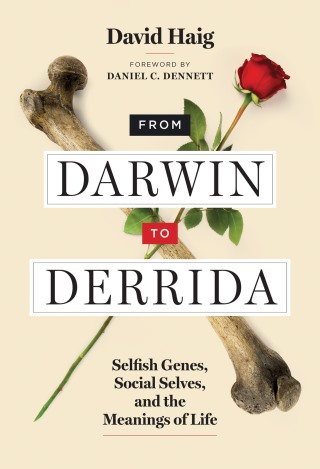 From Darwin to Derrida

Selfish Genes, Social Selves, and the Meanings of Life

How the meaningless process of natural selection produces purposeful beings who find meaning in the world.

In From Darwin to Derrida, evolutionary biologist David Haig explains how a physical world of matter in motion gave rise to a living world of purpose and meaning. Natural selection, a process without purpose, gives rise to purposeful beings who find meaning in the world. The key to this, Haig proposes, is the origin of mutable “texts”—genes—that preserve a record of what has worked in the world. These texts become the specifications for the intricate mechanisms of living beings.

Haig draws on a wide range of sources—from Laurence Sterne's Tristram Shandy to Immanuel Kant's Critique of the Power of Judgment to the work of Jacques Derrida to the latest findings on gene transmission, duplication, and expression—to make his argument. Genes and their effects, he explains, are like eggs and chickens. Eggs exist for the sake of becoming chickens and chickens for the sake of laying eggs. A gene's effects have a causal role in determining which genes are copied. A gene (considered as a lineage of material copies) persists if its lineage has been consistently associated with survival and reproduction. Organisms can be understood as interpreters that link information from the environment to meaningful action in the environment. Meaning, Haig argues, is the output of a process of interpretation; there is a continuum from the very simplest forms of interpretation, instantiated in single RNA molecules near the origins of life, to the most sophisticated. Life is interpretation—the use of information in choice.