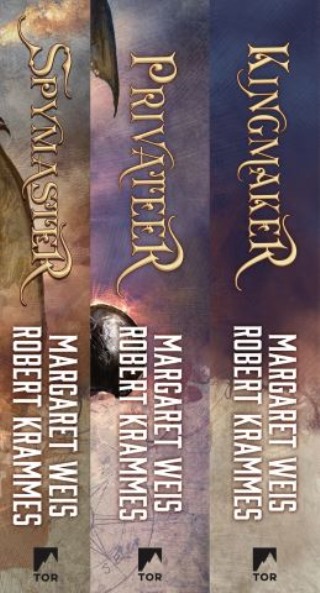 The Dragon Corsairs is a swashbuckling adventure trilogy from New York Times bestselling author Margaret Weis and Robert Krammes, set in the world of the Dragon Brigade series.

Captain Kate Fitzmaurice was born to sail. She has made a life of her own as a privateer and smuggler. But soon Kate’s checkered past will catch up to her. It will take more than just quick wits and her considerable luck if she hopes to bring herself — and her crew — through intact.

Spymaster: Hired by the notorious Henry Wallace, spymaster for the queen of Freya, to find a young man who claims to be the true heir to the Freyan, Kate begins to believe that her ship has finally come in. But no fair wind lasts forever.

Privateer: Captain Kate escapes the hangman's noose with the help of Prince Thomas, only to discover to her dismay that her dragon friend, Dalgren, has gone back to his homeland to face trial for desertion. A dangerous mission to the dark world of the Bottom Dwellers leads Kate to the discovery of a dark plot that threatens the lives of her friends and places the fate of a nation in her hands.

Kingmaker: In this thrilling conclusion, Kate and Sophia and their dragon Dalgren form a desperate plan to free Phillip from prison. Thomas is crowned king and discovers a plot by King Ullr to invade Freya. And Henry is forced to flee to the Aligoes where he makes a discovery that could change the fortunes of his beleaguered nation.

Margaret Weis: MARGARET WEIS is the longtime world-wide bestselling co-creator and co-author of The Dragonlace Chronicles, and recently, the Dragon Brigade trilogy. She worked at TSR, Inc., as a book editor for thirty years. She also is a publisher of role-playing games, including major franchises such as Serenity (Firefly) and Smallville.|||ROBERT KRAMMES is a game designer and the general manager at Aztec Video Productions. He is the author of the Dragon Brigade Series along with Margaret Weis. He lives in Cincinnati, Ohio.