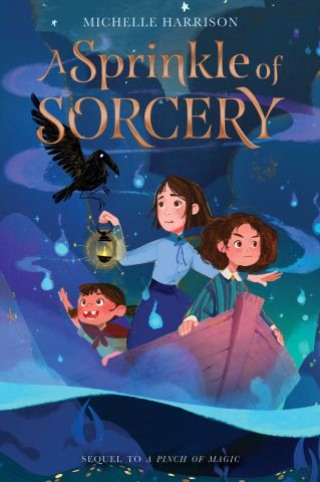 A Sprinkle of Sorcery

This sequel to A Pinch of Magic is another spellbinding sisterly adventure, this time with a haunted shipwreck, a fierce pirate, and, of course, a little magic!


The family curse has been lifted, and the Widdershins sisters—Betty, Fliss, and Charlie—are free to leave the misty prison isle of Crowstone. But when a mysterious girl arrives at their inn accompanied by a will-o’-the-wisp, or ghost, it seems another adventure has landed on their doorstep. The stranger, named Willow, is an escaped prisoner from nearby Lament, desperate to clear her father's name before he's executed for a crime he didn't commit.

Then Charlie is kidnapped by poachers, swept away on a dangerous mission in search of pirate treasure that's protected by a vengeful ghost. Betty, Fliss, and Willow pile into their trusty boat and embark on another incredible adventure, one that involves ghosts, fierce pirates, and a journey to a mythic island that exists only in legends. Can they save their sister—and themselves—once more?

Michelle Harrison:
Michelle Harrison is the author of twelve novels for children and young adults. Her first book, Thirteen Treasures, won the Waterstones Children's Book prize, and her work has been translated into seventeen languages. Michelle lives in England with her son, Jack, and a black cat called Marmite.