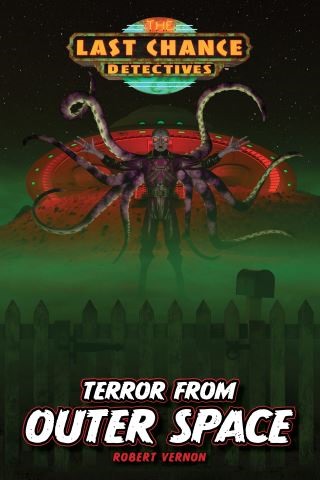 Here in book five of the series, characters have to face their fears. And readers will learn to trust God one step at a time, even when it doesn’t seem to make sense.

Will mysterious events cause the Last Chance Detectives to run scared?

Memories of Mike’s dad resurface when a space shuttle mission goes bad and the family of the pilot witness the shocking disaster in the desert skies above Ambrosia. Will Mike ever discover the truth about his dad’s plane crash in the Middle East? Why won’t God answer his prayers?

Soon another mystery unfolds as reports of strange and frightening apparitions filter in from the desert, along with smoky green fog. Could aliens and enemy soldiers both be attacking Ambrosia?

Mike, Winnie, Ben, and Spence investigate at an abandoned military base—only to discover that their greatest fears await them.

Get to know The Last Chance Detectives

Together, these four friends won’t stop until the mystery is solved!