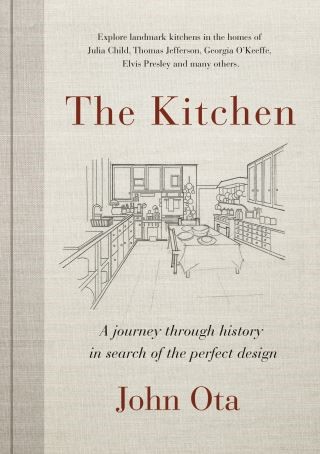 A journey through time-and the homes of Julia Child, Georgia O'Keeffe, Elvis Presley and many others-in search of the perfect design

One man's quest to seek out--and be inspired by--the great historic kitchens of Canada and the USA.

John Ota was a man on a mission--to put together the perfect kitchen. He and his wife had been making do with a room that was frankly no great advertisement for John's architectural expertise. It just about did the job but for a room that's supposed to be the beating heart of a home and a joy to cook in, the Otas' left a lot to be desired. And so John set out on a quest across North America, exploring examples of excellent designs throughout history, to learn from them and apply their lessons to his own restoration. Along the way, he learned about the origins and evolution of the kitchen, its architecture and its appliances. He cooked, with expert instruction. And he learned too about the homes and their occupants, who range from pilgrims to President Thomas Jefferson, from turn of the century tenement dwellers to 21st century Vancouver idealists, from Julia Child to Georgia O'Keeffe, and from Elvis Presley to Louis Armstrong.

John Ota has a refreshingly upbeat approach and a hunger for knowledge (and indeed for food). His energy and enthusiasm are contagious, and his insights of lasting value. Illustrated throughout, with photographs and also with drawings by the author, this is a book for homeowners, home makers, interior designers, cooks, armchair historians, and for anyone who--like John Ota before them--is looking for inspiration for a renovation.

John Ota: John Ota has been involved with architecture and design since 1978. He has written freelance articles for the Toronto Star, The Globe and Mail, Azure Magazine, Canadian House and Home and Canadian Architect. He has worked in architecture offices in Toronto, New York and Vancouver and has degrees from the School of Architecture at Columbia University and the University of British Columbia.

John has chaired the awards commitee of the Ontario Association of Architects. He has served as a Board Member on the Toronto Historical Board and has worked at the Ontario Ministry of Culture as the government lead on the Renaissance ROM project, the AGO Transformation project and the Revitalization of Ontario Place. In 2004, he was the lead curator on an exhibition called "Living Spaces, 21 contemporary Canadian houses" that toured Canada. John has acted as a guest critic at the Ryerson University School of Architecture and as an advisor to the Architecture Gallery at Harbourfront Centre in Toronto.