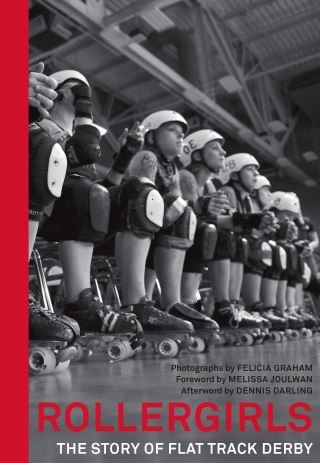 The Story of Flat Track Derby

Flat track roller derby is one of the country’s fastest growing sports. What started as a single league in Austin, Texas, a couple of decades ago has grown into an international phenomenon, with nearly two thousand leagues around the world.

Rollergirls captures the spirit of the game, which is poised to become an Olympic sport, and highlights the women who have become known as the godmothers of modern-day roller derby. Documentary photographer Felicia Graham takes readers on a visual tour of more than 160 black-and-white images, showcasing the confidence it takes to become a rollergirl and the camaraderie that develops among the players. Focusing on the Texas League, where it all began, Graham celebrates the culture and personality of flat track derby everywhere.

Despite their different reasons for joining the sport, women of varying professions, ages, and lifestyles have made roller derby uniquely their own. With tongue-in-cheek team names like the Hotrod Honeys and personas like Sparkle Plenty and Buckshot Betty, the players use their brains and brawn to master the strategic game while also expanding the sport internationally. It’s all done with bravado and a brash sense of humor unique to full-contact sports.

Graham has been photographing the Texas Rollergirls on and off the track, in Texas and on the international circuit, for more than a decade. Spending untold hours with the league and collecting thousands of photographs of pivots and blockers, adoring crowds, and the sweat of the bench, she has created a visual narrative of women who embody the freedom of flying around the track. In these pages, readers learn how regular girls become rollergirls--determined, athletic, intimidating, and powerful, all on their own terms.