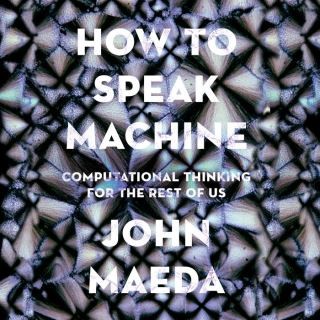 How to Speak Machine

Computational Thinking for the Rest of Us

Visionary designer and technologist John Maeda defines the fundamental laws of how computers think, and why you should care even if you aren't a programmer.

"Maeda is to design what Warren Buffett is to finance." --Wired

John Maeda is one of the world's preeminent interdisciplinary thinkers on technology and design. In How to Speak Machine, he offers a set of simple laws that govern not only the computers of today, but the unimaginable machines of the future.

Technology is already more powerful than we can comprehend, and getting more powerful at an exponential pace. Once set in motion, algorithms never tire. And when a program's size, speed, and tirelessness combine with its ability to learn and transform itself, the outcome can be unpredictable and dangerous. Take the seemingly instant transformation of Microsoft's chatbot Tay into a hate-spewing racist, or how crime-predicting algorithms reinforce racial bias.

How to Speak Machine provides a coherent framework for today's product designers, business leaders, and policymakers to grasp this brave new world. Drawing on his wide-ranging experience from engineering to computer science to design, Maeda shows how businesses and individuals can identify opportunities afforded by technology to make world-changing and inclusive products--while avoiding the pitfalls inherent to the medium.

John Maeda: John Maeda is an American technologist, designer, engineer, artist, investor, author, and teacher. He was recently appointed Chief Experience Officer at Publicis Sapient, the technology marketing consulting and delivery arm of communications conglomerate Publicis. He has held positions with Automattic, the parent company of WordPress.com, the venture capital firm Kleiner Perkins, led research at the MIT Media Lab, and served as president of the Rhode Island School of Design. Named as one of the 75 most influential people of the 21st Century by Esquire, Maeda draws on his diverse background as an MIT-trained engineer, award-winning designer, and executive leader to bring people and ideas together at scale. He is the author of several celebrated books, including The Laws of Simplicity and Redesigning Leadership. He has appeared as a speaker all over the world, from Davos to Beijing to São Paulo to New York, and his talks for TED.com have received millions of views. He was born, raised, and lives in the United States of America.JOHN MAEDA is the Head of Computational Design & Inclusion at Automattic. An engineer, computer scientist and designer by training, Maeda is also the former president of the Rhode Island School of Design and partner at Kleiner Perkins Caufield & Byers. He is also the author of the books The Laws of Simplicity and Redesigning Leadership.