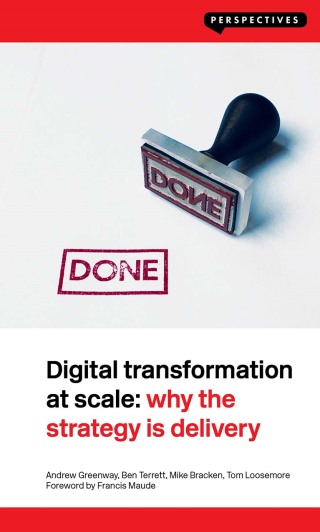 Digital Transformation at Scale: Why the Strategy Is Delivery

Why the Strategy Is Delivery

This book is a guide to building a digital institution. It explains how a growing band of reformers in businesses and governments around the world have helped their organisations pivot to a new way of working, and what lessons others can learn from their experience.

Andrew Greenway: Andrew Greenway worked in five government departments, including the Government Digital Service, where he led the team that delivered the UK’s digital service standard. He also led a government review into applications of the Internet of Things, commissioned from Government’s Chief Scientific Advisor by the UK Prime Minister in 2014. He now writes for several UK and international publications on government and institutional reform.|||Ben Terrett was Director of Design at the Government Digital Service, where he led the multidisciplinary design team for GOV.UK which won the Design of the Year award in 2013. Before working in government, Ben was Design Director at Wieden + Kennedy and co-founder of The Newspaper Club. He is a Governor of the University of the Arts London, a member of the HS2 Design Panel and an advisor to the London Design Festival. He was inducted into the Design Week Hall of Fame in 2017.|||Mike Bracken was appointed Executive Director of Digital for the UK government in 2011 and the Chief Data Officer in 2014. He was responsible for overseeing and improving the government’s digital delivery of public services. After government, he sat on the board of the Co-operative Group as Chief Digital Officer. Before joining the civil service, Mike ran transformations in a variety of sectors in more than a dozen countries, including as Digital Development Director at Guardian News & Media. He was named UK Chief Digital Officer of the year in 2014 and awarded a CBE.|||Tom Loosemore wrote the UK’s Government Digital Strategy, and served as the GDS’s deputy director for five years. He led the early development of GOV.UK. Outside government, Tom has also worked as the Director of Digital Strategy at the Co-operative Group, as a senior digital advisor to OFCOM, and was responsible for the BBC’s internet strategy between 2001 and 2007.