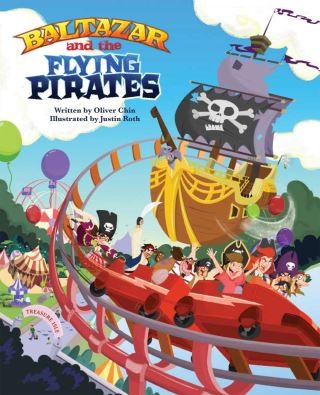 Baltazar and the Flying Pirates

- animation quality story and art, comparable to if Disney animated the “Pirates of the Caribbean” - combines the appeal of pirates with contemporary amusement parks - appeals to generations of families and millions of tourists who have like or endured Disneyland and Disneyworld on summer vacation. - tongue-in-cheek take-off on Disney's "Pirates of the Caribbean" ride, movie, and franchise - altogether, the film series has grossed +$2.79 billion worldwide and considered the 5th biggest movie franchise of all time - Disney has reportedly made tentative plans to shoot a fourth film in 2009 - pirates are an evergreen children's category of interest - special markets: amusement parks, children’s stores, gift retailers

Oliver Chin:
Oliver Chin is the author of the Tales from the Chinese Zodiac series, The Adventures of WonderBaby: From A to Z, Julie Black Belt, Timmy and Tammy's Train of Thought, and Welcome to Monster Isle.

Justin Roth illustrated The Year of the Tiger and The Year of the Rabbit from the Tales from the Chinese Zodiac series. He is a professional animator and character designer. A graduate of the School of Visual Arts in Manhattan, he has contributed to animated TV series such as Speed Racer for Nickelodeon, Nate the Great for PBS, Rocket Monkeys for 4Kids Entertainment, and other programs for clients such as the Disney Channel.