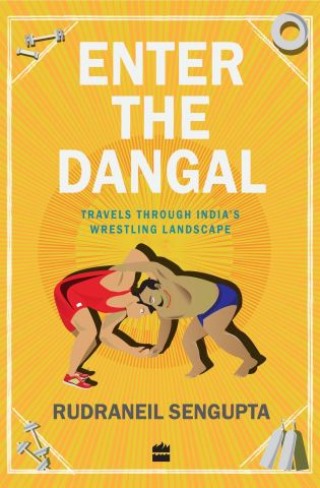 'When I'm on the mat, I am so filled with this awareness that the slightest touch feels like electricity to my body, and my body reacts to that the same way it would have reacted if I touched a livewire.' Wrestling, kushti, rules the farmlands, as it has for centuries. It had pride of place in the courts of Chalukya kings and Mughal emperors. It was embraced by Hinduism and its epics, and has led its own untroubled revolution against the caste system. The British loved it when they first came to India, then rejected it during the freedom struggle. No, wrestling has never been marginal -- even if it is largely ignored in modern-day narratives of sport and culture. From the Great Gama to Sushil Kumar -- whose two Olympic medals yanked the kushti out of rural obscurity and on to TV screens -- and the many, many pehalwans in between, Enter the Dangal goes behind the scenes to the akharas that quietly defy urbanization. It travels to villages and small towns to meet the intrepid women who fight their way into this 'manly' sport. Beyond the indifferent wrestling associations and an impervious media is an old, old sport.Enter the dangal, and you may never leave.

Rudraneil Sengupta: Rudraneil Sengupta is the deputy editor of Lounge, the weekly feature magazine of Mint. He lives in New Delhi with his wife and five dogs. He holds a masters degree in English from Jadavpur University, Kolkata, and worked as a sports journalist for TV news channels till 2010. In 2008, he was awarded the Ramnath Goenka Award for Excellence in Journalism for a documentary on river rafting in India (Best Sports Journalist, TV). In 2015, he won the Society of Publishers of Asia (SOPA) award for excellence in reporting on human rights issues for a story he co-wrote with Dhamini Ratnam on gender testing of female athletes.