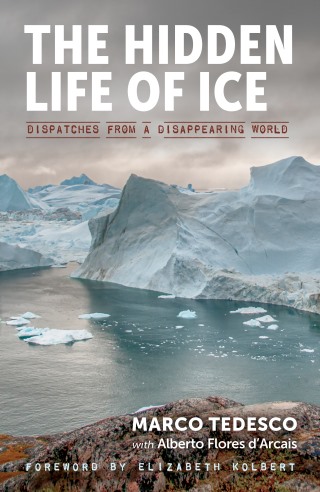 The Hidden Life of Ice

Dispatches from a Disappearing World

For most of us, the Arctic is a vast, alien landscape; for research scientist Marco Tedesco, it is his laboratory, his life’s work—and the most beautiful, most endangered place on Earth.

Marco Tedesco is a world-leading expert on Arctic ice decline and climate change. In The Hidden Life of Ice, he invites us to Greenland, where he and his fellow scientists are doggedly researching the dramatic changes afoot. Following the arc of his typical day in the field, he unearths the surprising secrets just beneath the icy surface—from evidence of long-extinct “polar camels” to the fantastically weird microorganisms that live in freezing cryoconite holes—as well as critical clues about the future of our planet.

Not just a student of its secrets, Tedesco is an acolyte of the Arctic’s beauty—its “magnificence and fragility,” as Elizabeth Kolbert writes in her foreword. Alongside the sobering facts on climate change, Tedesco shares stunning photographs of this surreal landscape— as well as captivating legends of Greenland’s earliest local populations, epic deeds of long-ago Arctic explorers, and his own moving reflections.

This is an urgent tribute to an awe-inspiring place that may be gone all too soon.

Marco Tedesco:
Marco Tedesco is a research professor at the Lamont-Doherty Earth Observatory at Columbia University. After receiving his Laurea degree and PhD from the University of Naples Federico II and the Italian National Research Council, he went on to join the NASA Goddard Space Flight Center as a postdoc and later, as a professor, became the founder and director of the Cryospheric Processes Laboratory. Tedesco has been featured in Science and frequently speaks as an expert on polar regions for The New York Times, The Washington Post, NPR, and others. He lives in New York.
|||
Alberto Flores d’Arcais was born in Rome and graduated from the University of Rome with a degree in philosophy. He’s written for newspapers and magazines since the 1970s and has reported on hard-hitting issues like civil wars, drug trafficking, and the collapses of dictatorships internationally since the 1980s. In 2002, he was a John S. Knight Fellow for Journalism at Stanford University. He now divides his time between New York and Rome.