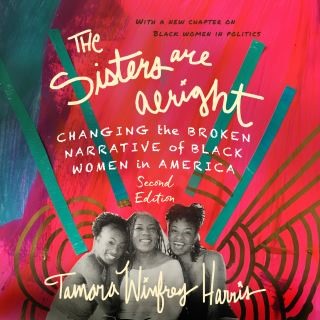 The Sisters Are Alright, Second Edition

Changing the Broken Narrative of Black Women in America

A slew of harmful stereotypes continues to follow Black women. The second edition of this bestseller debunks vicious misconceptions rooted in long-standing racism and shows that Black women are still alright.&#8232;
When African women arrived on American shores, the three-headed hydra-servile Mammy, angry Sapphire, and lascivious Jezebel-followed close behind. These stereotypes persist to this day through newspaper headlines, Sunday sermons, social media memes, cable punditry, government policies, big screen portrayals, and hit song lyrics. Author Tamara Winfrey Harris reveals that while emancipation may have happened more than 150 years ago, America still won't let a sister be free from this coven of caricatures.

The latest edition of this bestseller features new interviews with diverse Black women about marriage, motherhood, health, sexuality, beauty, and more. Alongside these authentic experiences and fresh voices, Winfrey Harris explores the evolution of stereotypes of Black women, with new real-life examples, such as the rise of blackfishing and digital blackface (which help white women rise to fame) and the media's continued fascination with Black women's sexuality (as with Cardi B or Megan Thee Stallion).

The second edition also includes a new chapter on Black women and power that explores how persistent stereotypes challenge Black women's recent leadership and achievements in activism, community organizing, and politics. The chapter includes interviews with activists and civic leaders and interrogates media coverage and perceptions of Stacey Abrams, Vice President Kamala Harris, and others.

Winfrey Harris exposes anti&ndash;Black woman propaganda and shows how real Black women are pushing back against racist, distorted cartoon versions of themselves. She counters warped prejudices with the straight-up truth about being a Black woman in America.

Tamara Winfrey Harris: Tamara Winfrey Harris is a writer who specializes in race and gender and their intersection with politics, popular culture, and current events. She is the author of Dear Black Girl: Letters from Your Sisters on Stepping into Your Power, and she has been called to share her analyses in media outlets such as NPR's Weekend Edition and Janet Mock's So POPular! on MSNBC.com. Winfrey Harris is vice president of community leadership and effective philanthropy at the Central Indiana Community Foundation, and she speaks at university campuses nationwide.