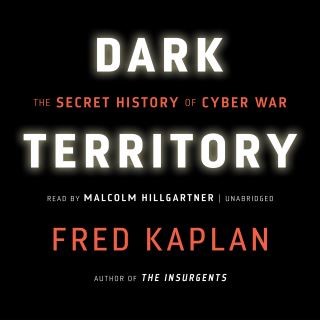 The Secret History of Cyber War

As cyber-attacks dominate front-page news, as hackers join the list of global threats, and as top generals warn of a coming cyber war, few books are more timely and enlightening than Dark Territory: The Secret History of Cyber War by Slate columnist and Pulitzer Prize–winning journalist Fred Kaplan.

Kaplan probes the inner corridors of the National Security Agency, the beyond-top-secret cyber units in the Pentagon, the “information warfare” squads of the military services, and the national security debates in the White House to tell this never-before-told story of the officers, policymakers, scientists, and spies who devised this new form of warfare and who have been planning—and, more often than people know, fighting—these wars for decades.

From the 1991 Gulf War to conflicts in Haiti, Serbia, Syria, the former Soviet republics, Iraq, and Iran, where cyber warfare played a significant role, Dark Territory chronicles, in fascinating detail, an unknown past that shines an unsettling light on our future.

Fred Kaplan is the national-security columnist for Slate and the author of six books, including the bestselling The Insurgents: David Petraeus and the Plot to Change the American Way of War, which was a finalist for the Pulitzer Prize. He has also written many articles on politics and culture for the New York Times, Washington Post, New York magazine, The Atlantic, Foreign Policy, and other publications. He graduated from Oberlin College and has a PhD from the Massachusetts Institute of Technology.

Malcolm Hillgartner is an actor, author, playwright, and professional narrator. Under the name Jahnna N. Malcolm, he and his wife, Jahnna Beecham, have written over one hundred books for young readers; their musicals have played in theaters across America. His audiobook credits include works by Dean Koontz, Nelson Algren, and William F. Buckley Jr.